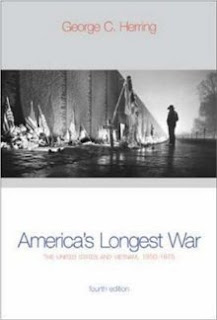 Product Description:
Comprehensive yet concise, America’s Longest War provides a complete and balanced history of the Vietnam War. It is not mainly a military history, but seeks to integrate military, diplomatic, and political factors in order to clarify America’s involvement and ultimate failure in Vietnam. While it focuses on the American side of the equation, it provides sufficient consideration of the Vietnamese side to make the events comprehensible.
About the Author:
George C. Herring is Alumni Professor of history at the University of Kentucky. He received his Ph.D. in History from the University of Virginia and taught at Ohio University before moving to the University of Kentucky. He is the author of numerous books, articles, and essays, including The Secret Diplomacy of the Vietnam War: The Negotiating Volumes of the Pentagon Papers (1983) and LBJ and Vietnam: A Different Kind of War (1994). He served as editor of the scholarly journal Diplomatic History from 1982 to 1986 and was President of the Society for Historians of American Foreign Relations in 1990. In 1991, he served as Visiting Fulbright Scholar at the University of Otago, Dunedin, New Zealand and from 1993 to 1994, he was Visiting Professor of History at the U.S. Military Academy, West Point.
By blue_eagle - May 23, 2011