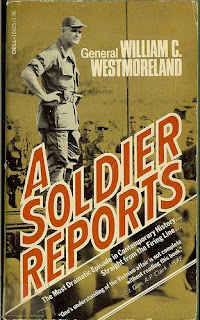 The general's early years: the son of a South Carolina textile owner, he graduated from West Point in 1936 and married the now grown-up nine-year-old with pigtails he had fallen in love with at Fort Sills.

Westmoreland aimed to hit the "wreckers" (regular enemy units) instead of the "termites" (guerrillas), although he also favored SEAL, CORDS, HOP TAC, SOG and other special squads against the partisan forces. From his utter inability to describe the key tactical defeat in the Ia Drang Valley to his unflagging refusal to understand why South Vietnamese politics were so "unstable" and his blindness to Air Force defoliation and Army mass murder, the man seems either stupid or dishonest. At least part of the incomprehension is probably genuine, since major parts of the war were being done by the CIA as counterinsurgency training outside ordinary military channels. He was pulled out in 1968, without umbrage, he claims. Then and only then morale collapsed and that signaled the end of the war - but Communism still had to be contained. To prove that he had no emotional connection with his job, the General describes visits to several POW camps, where Vietcong forces were imprisoned; he found that standards of international law were being upheld. His recurrent theme, however, is his access to the great - Truman, Johnson, Kennedy, Lodge, MacArthur (the real hero) and Ford. His jokes in their presence are reproduced for our benefit. It can be said in the book's favor that it seems, not ghostwritten, but a true reflection of the subject's mind.