Vietnam and America: The Most Comprehensive Documented History of the Vietnam War 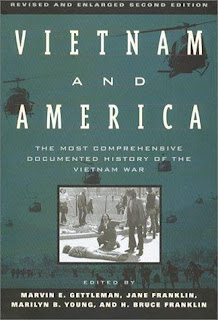 Fearful that an "America ignorant and innocent of Vietnam can again freely move against the self-determination of other nations," the editors have compiled here a history of United States involvement in Vietnam that draws equally on original material and surveys. Included are Vietnam's 1945 Declaration of Independence part of which paraphrases our own. The highlights of other key statements, speeches and treaties of the past 40 years, as well as such widely varied selections as Robert Scheer on the "Vietnam lobby" of the '50s, Seymour Hersh's account of the My Lai massacre, General Giap's recollection of the fall of Dien Bien Phu, and several excerpts from the Pentagon Papers. Although the publication of this material in one volume is immensely useful, the editors' notes are sometimes overbearing, as if the reader isn't trusted to come independently to their conclusion that U.S. policy in Vietnam should be condemned.
(by Library Journal)
The editors of this important anthology participated in the „teach-in'' movement of 1965, which mobilized the academic community against U.S. policy in Vietnam. Patterned after Gettleman's bestselling sourcebook of the period, Vietnam: history, documents, and opinions (1956), this work is chiefly designed to let the facts speak for themselves. Essential documents are reprinted, including the 1973 Paris Peace Accords, the 1954 Geneva Conference Declaration, the Gulf of Tonkin Resolution, and excerpts from the Pentagon Papers, together with well-researched notes, introductions, and an abstract preceding each piece. Controversial issues are explored (a whole chapter is devoted to the antiwar movement), but the selections are balanced fairly. Official statements by top political and military leaders on both sides are included. This convenient one-volume compilation of a wide range of largely primary source material is highly recommended for most libraries. Richard W. Grefrath, Univ. of Nevada Lib., Reno