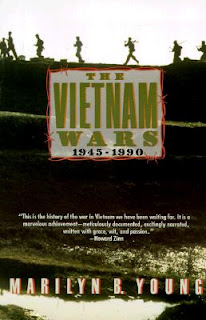 In this dark account of the political and diplomatic sides of the Vietnam wars and the psychic aftermath, the author contends that the Indochina experience refuted (temporarily) the simplistic assumptions that in foreign policy America always "meant well" and that communism was always "bad." The epithets popularly employed to characterize the enemy in Vietnam--"indifferent to human life," "dishonest," "ruthless"--came to characterize our own actions as well. From counterinsurgency expert Edward Lansdale's "cheerful brutalization of democratic values" to President Nixon's attempt to "make war look like peace," the moral breakdown is assessed here in disturbing detail. Young goes on to argue that more recent U.S. intervention in Lebanon, Libya, Grenada and Panama suggests that few lessons were learned in Vietnam--indeed, that the past decade has seen a dangerous resurgence of native faith in the benevolence of American foreign meddling. This, she maintains, goes hand in hand with a renewed commitment to use force in a global crusade against Third World revolutions and governments. Young, a history professor at New York University, paints a grim picture of our part in the Indochina war and its excoriating effects on the nation.

Two new books join the many which try to summarize and analyze the Vietnam War, its precedents, and its epilog, with differing approaches and results. Young (history, NYU) coauthored, along with William G. Rosenberg, Transforming Russia & China ( LJ 1/1/82). Her current study focuses on the American experience, while touching on the periods before and after direct American involvement. She provides some useful insights, and details debates among American leaders, but she draws predominantly on published sources and offers little new information. More significantly, her arguments are heavily biased (she seems to think that only the American and South Vietnamese military and governments demonstrated cruelty, corruption, deception, and destruction), leading to some troubling conclusions (e.g., that U.S. bombing of Cambodia may have been responsible for the later horrors of the Khmer Rouge), and leaving the reader unable to place events in any kind of valid historical perspective. In stark contrast to Young's black-and-white picture, Olson and Roberts (history, Sam Houston State Univ. and Purdue Univ., respectively) paint a picture of many colors. This successful popular history of the war is less scholarly, less detailed than The Vietnam Wars , but the better-balanced coverage throughout yields a more insightful, instructive history. At times the authors' emotionalism (e.g., the account of the My Lai massacre) clouds their presentation, and the otherwise fascinating discussion of the postwar media's depiction of the war is not up to date, but general readers will find their book to be a helpful and accessible introduction to the complexities of the Vietnam experience.