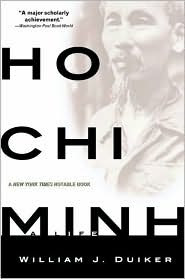 Original Title in English by Author: William J. Duiker
Publisher: Hyperion (November 28, 2001)
Reviews:
(from Publishers Weekly)
It's difficult to think of someone more qualified to write this biography than Duiker (The Communist Road to Power in Vietnam), the retired Penn State University historian who has specialized in the Vietnam War for more than three decades. In his massive, thoroughly researched andDin the mainDquite accessible new biography, Duiker succeeds extremely well in illuminating the life and times of Ho Chi Minh, North Vietnam's leader, a man Duiker calls a "master motivator and strategist" and "one of the most influential political figures of the twentieth century." Covering both the personal and political life of the revolutionary leader, Duiker fascinatingly traces Ho's early travels to New York, Boston and Paris, as well as his many years in exile in France, China, Thailand and (during WWII and the war against the French of 1945 to 1954) in the rugged mountains of northern VietnamDeras in Ho's life for which documentation has only recently become available. Duiker's detailed recounting of the momentous and extremely complicated events that took place in 1945 following the Japanese surrender, when Ho Chi Minh's Vietminh revolutionary party seized power in northern Vietnam, is riveting. And his account of the not-always-harmonious relations between Ho and the Communist leaders of China and the Soviet Union probes a subject that has long been overlooked by Western scholars. In the end, Duiker portrays Ho Chi Minh as a fervently anticolonial nationalist who, though a committed Marxist, honestly thought he could count on the United States, which had promised to oppose French colonization after WWII. Referring to a long-raging debate about Ho, he says, "The issue is not whether he was a nationalist or a Communist in his own way he was both."
(from Library Journal)
Neither the cryptic, diabolical enemy nor the icon of the Left, "Uncle Ho" is now the subject of this objective historical study. Vietnam expert Duiker (The Communist Road to Power in Vietnam) here writes the first biography of Ho to use critical sources in Vietnamese, French, Chinese, Russian, and English. His narrative encompasses the last days of the Vietnamese monarchy, in which Ho's father was an official; the French conquest of and attempt to dominate Indochina; the anti-imperialist struggle, aided by Russian and Chinese national and Communist interests; and the career of Ho, who died in 1969, revered by some as the Father of the Revolution and reviled by others as a murderous tyrant. The author carefully sorts out the intricate, often ambiguous evidence, supplying enough background for the interested general reader and enough detail, especially in the extensive notes, for the demanding specialist. Highly recommended for larger collections.
By blue_eagle - June 02, 2011