The Sacred Willow: Four Generation in the Life of a Vietnamese family 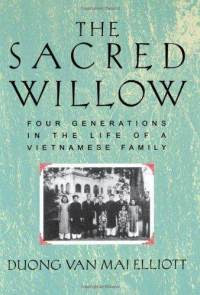 Reviews:
(from Publishers Weekly)
In this deeply moving family saga, Elliott offers a microcosm of the history of modern Vietnam. Her great-grandfather passed the grueling tests through which unpropertied Vietnamese men tried to advance by entering the government as mandarins. More than half a century later, in 1947, when the author was six, her family fled their smoldering ancestral village while Ho Chi Minh's troops battled the French. After spending her childhood in Hanoi and her adolescence in Saigon, she studied at Georgetown University in the early 1960s. She and her future husband, David Elliott, moved to Saigon, marrying in 1964; there Elliott took a job with the Rand Corporation in a U.S. Defense Department-sponsored project, interviewing communist prisoners and defectors. Though her parents were staunchly anti-communist (her father served as governor in the puppet kingdom run by the French and later worked in South Vietnamese dictator Ngo Dinh Diem's regime), the author scorned Diem as well as the communists and, by 1969, called for an end to U.S. intervention. Family loyalties were divided: her eldest sister became a hard-core communist, while one of her brothers spent more than three years in Vietcong "reeducation" prison camps. Elliott writes with unsparing candor about forging a new identity, about her nation's destruction and its partial revival with the reintroduction of free-market mechanisms and, above all, about her family's harrowing passage through a long and difficult history.
(from Library Journal)

Family bonds are the core of Vietnamese society, so there can be no better vehicle for understanding the modern history of Vietnam than the microcosm of the family. The Duong clan of Van Dinh village in northern Vietnam contributed several generations of high-ranking officials to the service of the imperial, colonial, and postcolonial state from the late 19th century to the fall of South Vietnam in 1975. The story of this family is the story of modern Vietnam, viewed from the perspective of the elite, well educated, and powerful. With deep insight and empathy, Elliott skillfully weaves the life stories of her great-grandparents, grandparents, parents, uncles, aunts, sisters, brothers, and cousins into the intricate tapestry of modern Vietnamese history. This is a beautiful and utterly absorbing work, a book of extraordinary emotional power that is also a major contribution to historical understanding. It deserves the widest audience and belongs in all libraries.?
(from Kirkus Reviews)
sprawling attempt to chronicle a large Vietnamese family buffeted by French colonization, WWII, and the French and American wars. Elliott was born into an upper-middle-class family in northern Vietnam. Her long book tells her family's story in detail, beginning with her great-grandfather, a mandarin who died in 1920. Elliott's goal is to weave the many stories over four generations into a tale that reflects, "in miniature, the history of Vietnam in the modern era.'' After five years of researching and interviewing, Elliott has come up with a book that partially reaches her lofty goal. That's because the book tells the story of only one portion of Vietnamese society and sheds precious little light on the country's large peasant class, the urban working class, or the intelligentsia. Elliott tells her own family's story well and in great detail. She begins with her formidable great-grandfather Duong Lam and then chronicles the next three generations of the Duong clan. Most of the males held high-level government jobs or did well in business. That includes Elliott's father, who was mayor of Haiphong during the last years of French rule. Most of the author's family fled to Saigon when the Vietnamese Communists took over North Vietnam in 1946, and most left Saigon in April 1975 just before the Communist takeover there. Elliott, who studied foreign affairs at Georgetown University in the early 1960s, married an American and has lived in this country since 1968. Her writing comes alive most effectively in the first-person sections in which she describes growing up in Hanoi and Saigon and coming of age in Washington. The least successful parts of the book are the facile, generalized attempts at relating Vietnamese historical events. A good look at Vietnam's recent history through the lives of a middle-class family.
By blue_eagle - June 02, 2011