Child of War, Woman of Peace 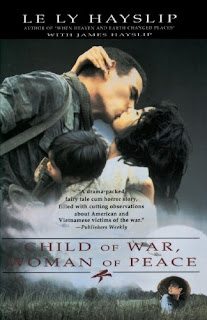 (by Publishers Weekly)
Alternately shocking and inspiring, this sequel to Hayslip's award-winning 1989 account of her youth in wartime Vietnam, When Heaven and Earth Changed Places, tells how that peasant girl, now in the U.S., parlays a quick wit and a spirit toughened by war, poverty, rape and desertion into personal worth of more than a million dollars, and finds spiritual peace. Wary of men, but hoping unsuccessfully to gain security through two marriages with Americans, she exchanges the horrors of Vietnam for the unknown ones she finds in southern California. There the deaths of both unloved husbands in short order leave her with a little cash, some Social Security aid and income from small jobs. On this, she raises her children (the eldest of whom is her coauthor here), makes canny investments and almost continually suffers through sorry relations with men who deceive her. But religious faith bolsters her, and she finds satisfaction in the foundation she sets up to help her devastated country, called East Meets West. A drama-packed fairy tale cum horror story, the book is filled with cutting observations about American and Vietnamese victims of the war.
(by Library Journal)

In the compelling When Heaven and Earth Changed Places ( LJ 5/15/89), Hayslip told of her life in Vietnam and her return to find her family. Joined by her son, she here tells of her encounter with U.S. society, struggle for financial independence, several return trips to Vietnam, and founding of the charitable East Meets West Foundation. Her Buddhist-inspired philosophy of peace is sincere, but while her first book evoked admiration, this one presents a stubborn, naive heroine who uses others as much as she is used. There are marriages of convenience, evil relatives (Vietnamese and American), betrayed love, talks with her dead father, fortune-tellers--all the ingredients of a TV miniseries. In fact, the two books are the basis of a forthcoming Oliver Stone movie. For public libraries where the first book was in demand.
By blue_eagle - May 26, 2011