Major Problems in the History of the Vietnam War: Documents and Essays 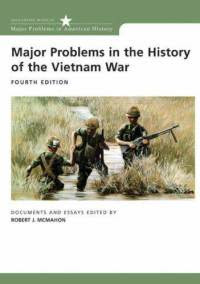 Designed to encourage critical thinking about history, the Major Problems in American History series introduces students to both primary sources and analytical essays on important topics in U.S. history. Major Problems in the History of the Vietnam War incorporates new research expands its coverage of the experiences of average soldiers.
About the Author:
Robert J. McMahon received his Ph.D. from the University of Connecticut in 1977 and was professor of History at the University of Florida before moving to Ohio State University. He specializes in United States diplomatic history. He is the author of Colonialism and Cold War: The United States and the Struggle for Indonesian Independence (1981) and The Cold War on the Periphery: The United States, India, and Pakistan (1994). He is also the co-editor of the Problems in American Civilization book The Origins of the Cold War, which entered its fourth edition in 1999.
Thomas Paterson is Professor of History Emeritus at the University of Connecticut and received his Ph.D. from the University of California, Berkeley in 1968. In addition to being the General Editor of Houghton Mifflin's Major Problems series, he is co-author of Major Problems in American Foreign Relations, 5/e, (Houghton Mifflin, 2000) and A People and A Nation, 6/e (Houghton Mifflin, 2001). In addition to authoring several books and editing collections of essays on the history of U.S. Foreign Relations, he served as senior editor of the four-volume Encyclopedia of American Foreign Relations (1997). He is part president of the Society for Historians of American Foreign Relations.
By blue_eagle - May 26, 2011