The North Atlantic Treaty Organization was created in 1949 by the United States, Canada, and several Western European nations to provide collective security against the Soviet Union. 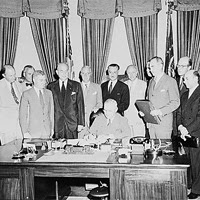 Signing of the NATO Treaty

NATO was the first peacetime military alliance the United States entered into outside of the Western Hemisphere. After the destruction of the Second World War, the nations of Europe struggled to rebuild their economies and ensure their security. The former required a massive influx of aid to help the war-torn landscapes re-establish industries and produce food, and the latter required assurances against a resurgent Germany or incursions from the Soviet Union. The United States viewed an economically strong, rearmed, and integrated Europe as vital to the prevention of communist expansion across the continent. As a result, Secretary of State George Marshall proposed a program of large-scale economic aid to Europe. The resulting European Recovery Program, or Marshall Plan, not only facilitated European economic integration but promoted the idea of shared interests and cooperation between the United States and Europe. Soviet refusal either to participate in the Marshall Plan or to allow its satellite states in Eastern Europe to accept the economic assistance helped to reinforce the growing division between east and west in Europe.


Samples of Translation | Our Translators | Need a quote? | Contact us
By Vietnam Hoc Institute of Research and Training - August 22, 2015