The Global Financial Meltdown shows that the risk is real. You may lose everything in just seconds.

Of course the crisis has not happened just like it. It is a result of many flaws in the system. Many researchers and finance specialists have warned us about the risk.

Here is a list of "Survival Guide" readings to educate yourself against some death traps. Could it help really? One thing is for sure, you will learn a lot. BIG LESSON TO RETAIN: Don't live on credit, ever.

1. Original Title in English:
Financial Armageddon: We Are in a Battle for our Very Survival...
Author: John Hagee

Everything prophesied in the Bible is coming to pass! It is no secret that we are living in a time of global crisis. The financial meltdown of Wall Street, bank failures, the subprime lending crisis, and uncontrollable gasoline prices are creating enormous stress for Americans. And now, we are facing an economic crisis that many are comparing to the events leading up to the...morel

"In 'Crisis Investing', Douglas Casey offers virtually irrefutable evidence that a major crash of the U.S. economy is now inevitable. If Casey is correct, then prudent, thrifty Americans who have prepared for the future in traditional ways will soon be completely wiped out." 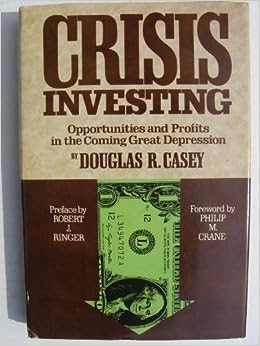 3. Original Title in English:
The Coming Collapse of the Dollar and How to Profit from It: Make a Fortune by Investing in Gold and Other Hard Assets 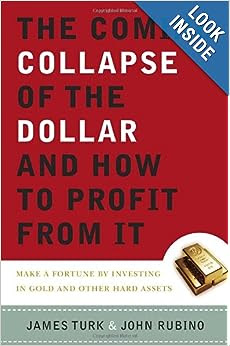 This primer on economic principles brilliantly analyzes the seen and unseen consequences of political and economic actions. In the words of F.A. Hayek, there is "no other modern book from which the intelligent layman can learn so much about the basic truths of economics in so short a time."

There is a war against gold. Politicians hate a rising price of gold. So do centralbankers. A rising price of gold testifies against the politicians, who spend more moneythan they collect in taxes or borrow at interest, and it also testifies against central bankers,whose promises to stop rising prices is a lie that has not come true since about 1939. So, these people do whatever they can to ridicule gold and gold buyers. They dowhatever they can to drive down the price of gold – everything except the one thing thatwould drive it down: cease inflating.

Currency that a government has declared to be legal tender, but is not backed by a physical commodity. The value of fiat money is derived from the relationship between supply and demand rather than the value of the material that the money is made of. Historically, most currencies were based on physical commodities such as gold or silver, but fiat money is based solely on faith. Fiat is the Latin word for "it shall be".

Investopedia explains 'Fiat Money'Because fiat money is not linked to physical reserves, it risks becoming worthless due to hyperinflation. If people lose faith in a nation's paper currency, like the dollar bill, the money will no longer hold any value. Most modern paper currencies are fiat currencies, have no intrinsic value and are used solely as a means of payment. Historically, governments would mint coins out of a physical commodity such as gold or silver, or would print paper money that could be redeemed for a set amount of physical commodity. Fiat money is inconvertible and cannot be redeemed. Fiat money rose to prominence in the 20th century, specifically after the collapse of the Bretton Woods system in 1971, when the United States ceased to allow the conversion of the dollar into gold. 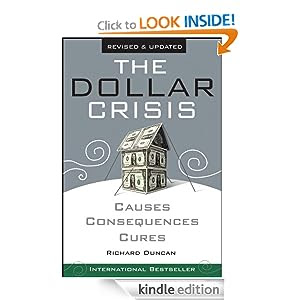 In this updated, second edition of the highly acclaimed international best seller, The Dollar Crisis: Causes, Consequences, Cures,
Auhor Richard Duncan describes the flaws in the international monetary system that have destabilized the global economy and that may soon culminate in a deflation-induced worldwide economic slump.

The Dollar Crisis is divided into five parts:

About YourVietbooks.com YourVietBooks is a selection of books and articles on and about Vietnam. Categories include: Culture, History, Vietnam War, Politics, Biographies, Contemporary Vietnam, International Relations, Doing Business in Vietnam, Reference and Languages, Zen Buddhism, Philosophy, Art and Literature. Some articles are available only in English, French, German or Vietnamese. Our qualified and experienced translators can provide translations of e-books or articles on demand. Read more...
Samples of Translation | Our Translators | Need a quote? | Contact us
By Dr Anh-Tho Andres Kammler - June 01, 2014